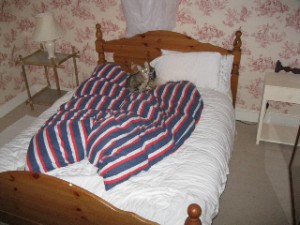 While builders were renovating our house, a feral cat moved in and gave birth to three kittens in our bed. I’m sure cat lovers would have found this adorable, three cute ickle bundles of mewling fur. Me? Not so much.

The bed sheets and mattress were honking, ruined and needed replacing. The builders assured us they hadn’t encouraged the cat to move in but the three tins of empty Whiskas we found in the bedroom wardrobe hinted otherwise.  We asked the builders to solve the problem. No questions asked. Obviously I felt guilty (ish)…

As previously mentioned I’d always believed that cats could recognise dog lovers at 100 yards and adapt their behaviour accordingly. But when we moved back in, this feral cat appeared exactly 15 minutes later, complete with weeping, oozing sore on its ear. It took a nonchalant glance at us sitting in their enjoying ourselves in its garden and shot in through the front door, up the stairs and straight into its old bed (now garnered with brand new sheets and mattress) and curled up without a care. I wasn’t best pleased.

Was the cat returning to mourn? Visiting the last place it had seen its kittens? Did cats do that? If so I was prepared to feel a bit bad.  But no. Turns out the builders had set the kittens up in a lined box in the garden hedge at the back of the house. The cat had simply left them to themselves in the hedge and headed into its house for some much-missed creature comforts. That made more sense, that was more like the cats I’d heard about.

Claudette the Cat, as the children soon christened her was evidently delighted that some human beings had turned up to furnish her house with comforts and food. From now on every door we left open and unattended or every window we cracked open resulted in Claudette ransacking the kitchen bin or falling asleep on the new sofa. One time we were putting the children to bed and discovered her curled up fast asleep beneath the duvet  in one of the kid’s beds. Another time, we found her on the kitchen counter hooking sausages out of the frying pan.

The kids soon set up, a semi-approved, defensive perimeter around the house armed with water pistols. For two days, they squirted Claudette every time she approached one of our doors. As training methods go, it wasn’t terribly successful.