Sam, aged 3, had been catching invisible baby dragons all morning long. Cupping his hands together he carefully showed me  all the blue dragons, red dragons, yellow dragons he’d captured around the house. They were all  very cute – if a little invisible.

Later that afternoon he appeared at my side with his proffered hands cupped,  just as before. I don’t know what possessed me but I grinned and clapped his hands together. I will never forget the expression of horror on his face.

Now smeared across his palms were the remains of a spider.

After her bedtime story, Ava (5) said,
“Daddy, could you stop calling me little monkey?”
“Ok… how about another animal then… how about ‘Little Lemur’, like King Julian?”
“Well…”
“Or ‘L’il Ay-Ay’ then, like Maurice…?”
“Bush Baby.”
“Oh. Ok. then. Night Night Bush Baby.”
“Bush Babies are nocturnal Daddy, which means I have to be awake now!”

Sadly, for my children, I am the complete opposite of Steve Backshall. A wasp will force me from a room or picnic faster than Usain Bolt – screaming and flapping my arms like my five year old does when I ask her to finish  her broccoli. But the fact that I wasn’t stung until I was 39 years old proves this tactic works.

Steve Backshall is Sam’s hero. Sam gets stung by wasps about five times a year.

This was the explanation my 6 year old son, Alexander sobbed as we held him cradling his arm at the bottom of our 6 foot tall slide. At this stage I realized that the level of supervision we provided our children when they were playing in the garden may have slipped beyond what was sensible… END_OF_DOCUMENT_TOKEN_TO_BE_REPLACED

While builders were renovating our house, a feral cat moved in and gave birth to three kittens in our bed. I’m sure cat lovers would have found this adorable, three cute ickle bundles of mewling fur. Me? Not so much.

The bed sheets and mattress were honking, ruined and needed replacing. The builders assured us they hadn’t encouraged the cat to move in but the three tins of empty Whiskas we found in the bedroom wardrobe hinted otherwise.  We asked the builders to solve the problem. No questions asked. Obviously I felt guilty (ish)… END_OF_DOCUMENT_TOKEN_TO_BE_REPLACED

Since the kids had established their perimeter defences around the house (waterpistols only), Claudette the feral cat hesitated before approaching an open door. But that was the only change to her behaviour.

Now, she glanced around, gauged the distance to door vs. distance of approaching small boys and merely squinted her eyes, tilted her head away from the direction of water spray and made her bold dash as usual.

Why didn’t this cat get the message that she wasn’t wanted? END_OF_DOCUMENT_TOKEN_TO_BE_REPLACED

We had been feeding Claudette the Cat for a few days now and were sitting outside, enjoying a BBQ in peace, watching her stalking through the herb beds. I wondered aloud if feeding her tins of catfood might actually be bad for a wild cat or might adversely affect her hunting skills. She had kittens to support obviously and we were due to leave for a holiday. But with exquisite comedy timing she pounced on an unlucky mouse, tilted her head back and swallowed the screeching critter in a matter of seconds.  ‘I guess she’ll manage just fine…’ commented our cat lover friends. END_OF_DOCUMENT_TOKEN_TO_BE_REPLACED 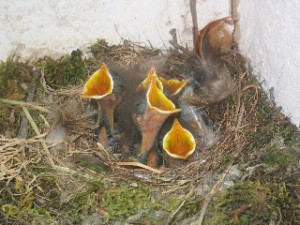